We are a powerful group coming together with one voice in Newham. We want to make sure that we get a regeneration in Custom House that works for everyone AND to provide truly affordable housing for our community, now and in the future.

We were set up in 2018 by members of PEACH Housing Club – the People’s Empowerment Alliance for Custom House – to be a legal entity owned by the community, to give local people a voice in the regeneration of our area. 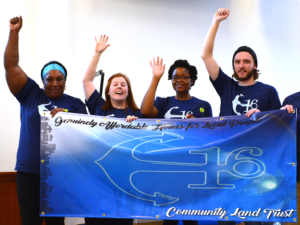 Anyone who lives, works or has a connection to Newham can join E16 CLT and buy a share for £1. Members can get involved in the work, events and activities that we do and vote for the board. E16 CLT is owned by it’s members – the local people who have bought a share.

One Member – One Vote

Each year, members can vote for board members as well as participating in other big decisions. This is always on the basis of one member, one vote, even if one member invested thousands of pounds they would still only have one vote.

Not For Private Profit

The E16 CLT is here to benefit the community and we are aiming to provide truly affordable housing for local people. Housing that stays affordable forever, not just for the first person who lives there. This means that no individuals will be able to make profit from the CLT such a through renting out a property privately. Any surplus made by the CLT itself will be reinvested in developing the CLT to the benefit of the community.

What's the difference between PEACH and E16 CLT?

The E16 CLT was set up by the PEACH Housing Club in 2018 and has a legal structure which means our members can own, build and manage land, housing and community buildings. Being a CLT also means we can form legally binding partnerships with people like Newham Council and access funding specifically set aside for CLTs which PEACH cannot do.

PEACHʼs focus is on the bigger picture of securing a Regeneration in Custom House that is community-led by growing our power and voice with Newham Council, rather than specifically building and managing homes like E16 CLT. While we are both united and aligned under the same mission to secure genuinely affordable housing in the area, creating two different organisations means we maintain our ability to both collaborate and challenge our partners at the same time.

E16 CLT was officially registered as a Community Land Trust in October 2018, however the ground work stretches back much further than that and E16 CLT was born out of the hard work of members of the People’s Empowerment Alliance for Custom House (PEACH) over the last few years.

PEACH has been working hard with local residents in the Custom House neighbourhood to make improvements to 4 key areas voted on by the local community: Jobs & Education, Housing & Regeneration, Safety and Health since 2013. Through PEACH the community has set up a Workers Co-operative, won over millions of pounds of repairs on local estates and campaigned for the Council to break the contract with Mears.

Since the summer of 2015, PEACH have been running the Housing Club, a group which around 150 residents have joined which meets regularly to discuss Housing issues with a focus on the Council’s regeneration of the area. Something which had yet to begin despite residents first hearing about it in the early 2000’s, leaving many in limbo. 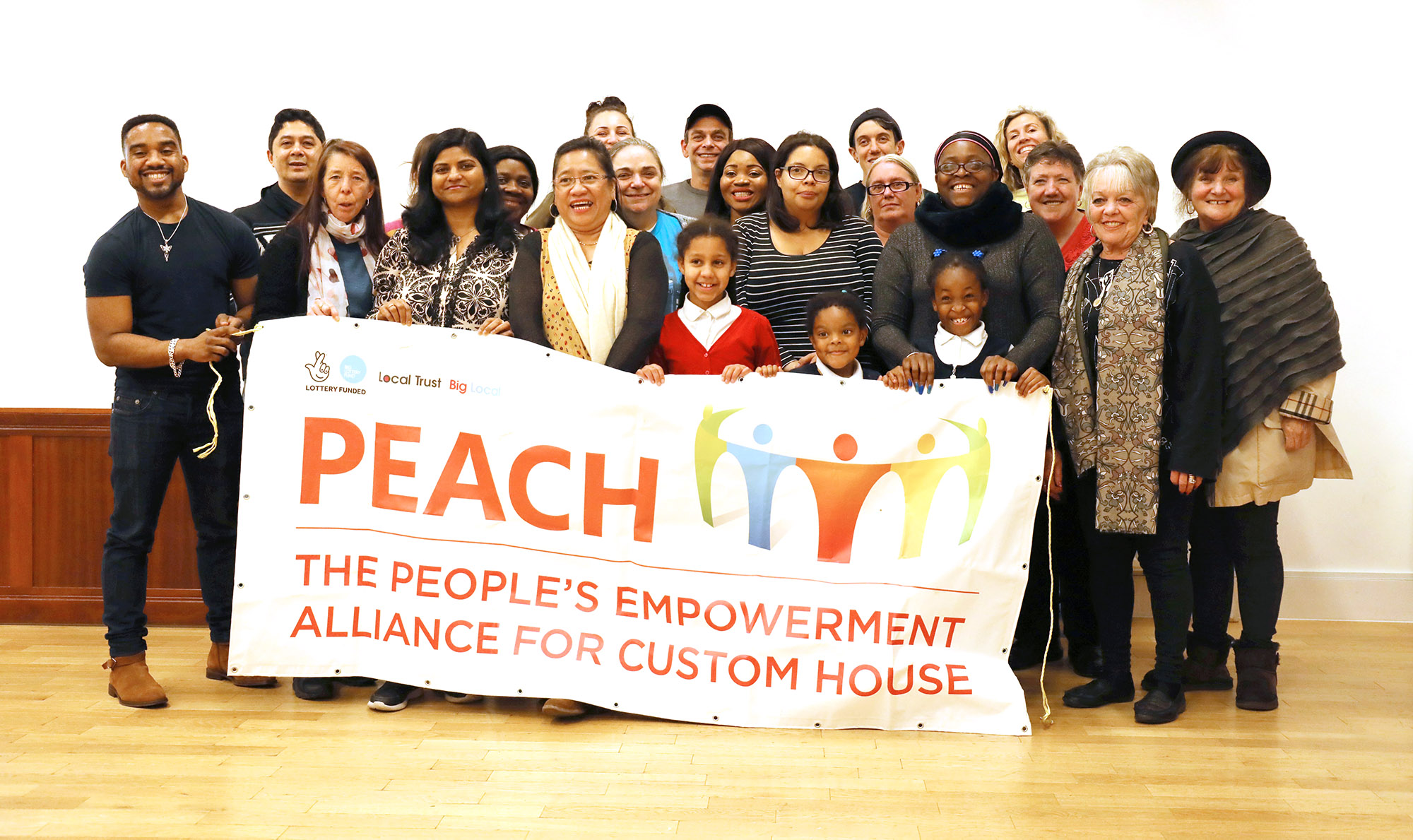 In October 2016, PEACH Housing Club members decided to take things into their own hands. Having seen regeneration schemes around them in London, residents were keen to avoid the breaking up of the community and the replacement of lot’s of social housing with private luxury developments – so decided to do our own plans – a realistic and economically viable plan that reflects what local people want to see for the future of their area. We finished these and took them to the Council in September 2017. 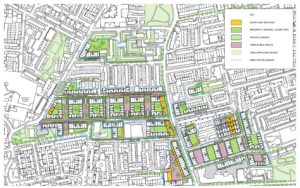 Before Christmas in 2017, members decided to take another step forward – while PEACH Housing Club remains as a group of dedicated residents standing up for themselves, members also wanted a chance to directly participate in delivering the future regeneration of the area To do this, it was decided we needed our own housing organisation – so members voted to set up our own Community Land Trust and committed Housing Club members volunteered to form a board and set up the organisation with the aim of providing genuinely and permanently affordable housing in our area. 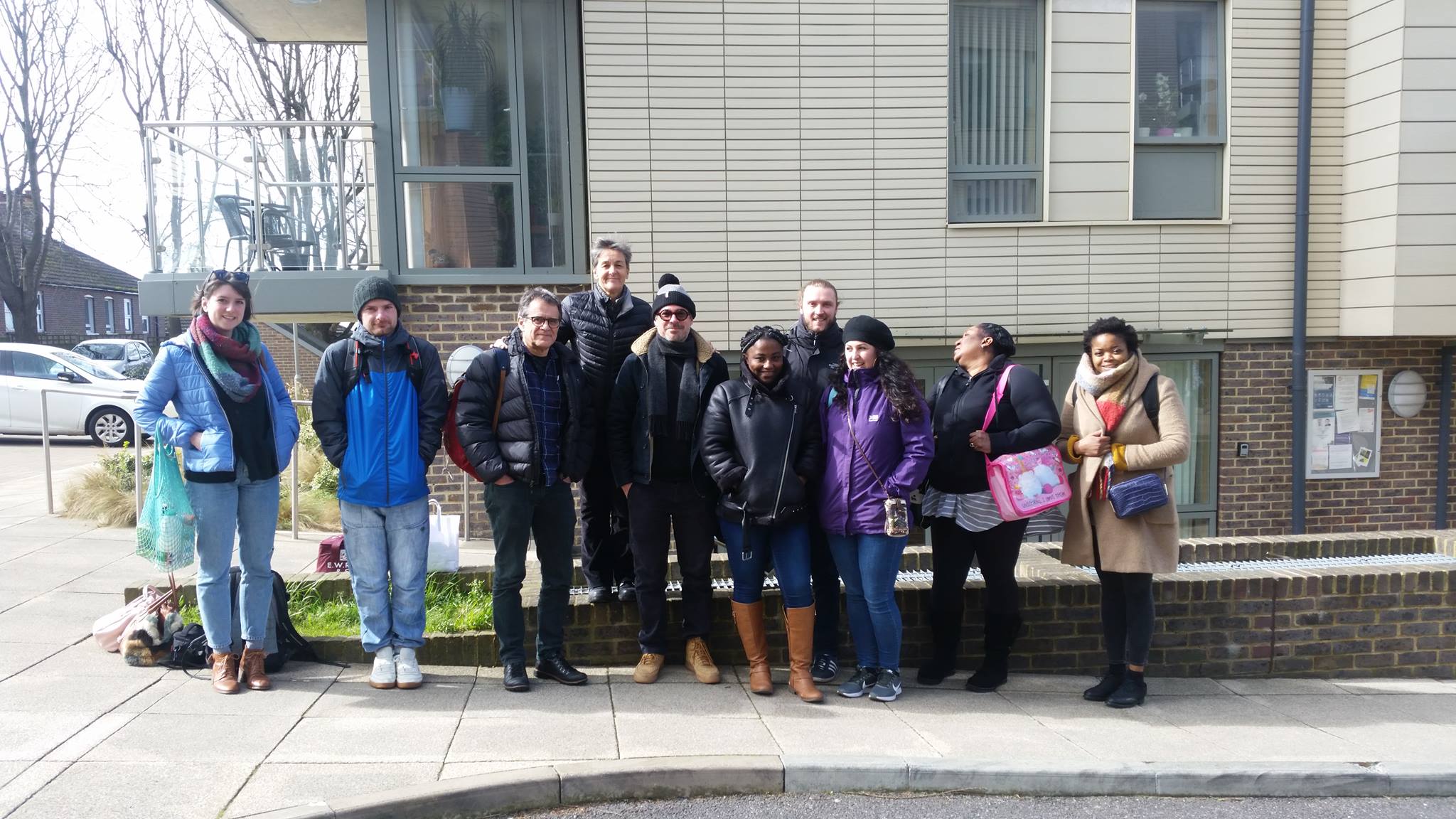